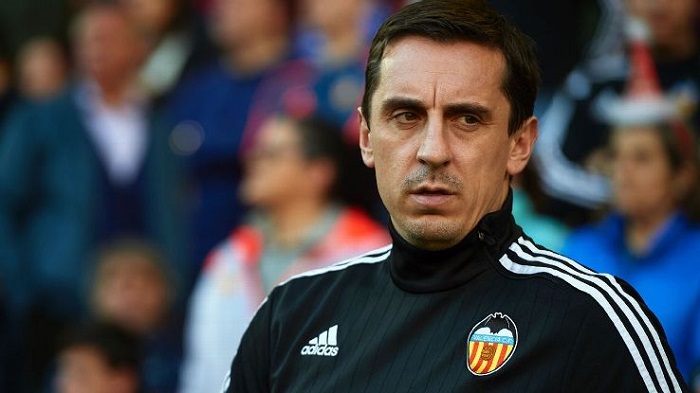 Gary Neville’s tumultuous spell at Valencia was brought to an end on Wednesday, with the Spanish La Liga club citing that recent results weren’t good enough. During his time at the Mestalla Stadium, Neville dragged Los Che down the La Liga table from a top-half finish to being just six points from the relegation zone.

And with only three wins from 16 in the division, Neville can have little argument at the decision. So what next for the Englishman? Neville is still contracted to England in an assistant role so national team manager Roy Hodgson will be expected his no.2 to join him ahead of this summer’s European Championships in France.

However, the former Manchester United captain may consider a break from the spotlight while he continues his development. Neville has been linked with a number of vacant positions, but it’s hard to see the 41-year-old jumping straight into a managerial role.

He remained philosophical in his statement following the sacking: “I would like to thank Valencia, the fans, staff and the players. I would have liked to have continued the work I started, but I understand that we are in a results business, and in the 28 games (10 wins, seven draws and 11 losses) they have not been to my standards or to those which are required by this club.”

Aston Villa are one club reportedly considering the coach, but they have a demanding job for the next manager and it may be too big for Neville to handle. Former Manchester United boss David Moyes took time off after his sacking from La Liga side Real Sociedad, and he may be talking with Neville to do the same.

Neville has a lot of responsibilities with his coaching role with the England national team, his co-ownership of Salford, and his punditry role with Sky Sports on the table for him, so some time off might be the best option. There won’t be a shortage of jobs in the English pyramid over the months, but contemplation must begin on just where it went wrong at Valencia.

Los Che failed to keep a clean sheet in La Liga under Neville, and suffered all too many defeats to sides embroiled in the relegation zone. They struggled for goals, having been shut out in seven of their 16 league games, and considerably underperformed on home soil. Supporters never took the Englishman given how badly they started under Neville, so he was under pressure from day one in truth. While brave to take the job, Neville must be wiser when choosing what to do next.