END_OF_DOCUMENT_TOKEN_TO_BE_REPLACED

Some juicy match-ups this week, there should be plenty of opportunities to score for the top strikers in the League.

END_OF_DOCUMENT_TOKEN_TO_BE_REPLACED

A week with some massive matches and some surprising results. Let’s take a look at the five goalkeepers that fared better: only three of them gained points. END_OF_DOCUMENT_TOKEN_TO_BE_REPLACED

An interesting couple of days in Serie A, where Juventus and Roma closed the gap on Napoli and Inter. END_OF_DOCUMENT_TOKEN_TO_BE_REPLACED 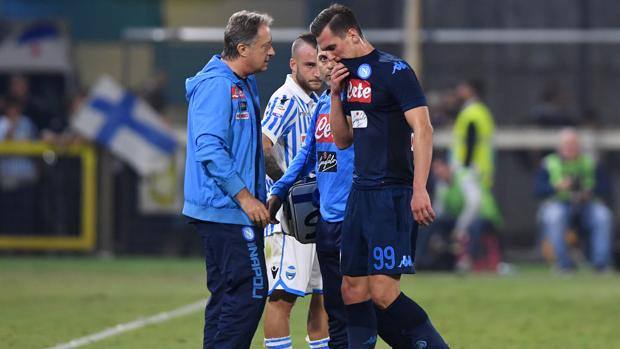 On Saturday, Napoli came up on top in the battle with Spal in Ferrara, however, they lost their centre-forward Arkadiusz Milik in the process. The exams revealed an ACL tear in the right knee and he had surgery to fix it on Wednesday. He suffered a similar injury on the other knee last season on October 8th: he returned in mid-February, but the coach Maurizio Sarri only used him in small cameos down the stretch because he was clearly behind the other players conditioning-wise. Napoli’s doctors described the recent injury as a “complex tear”, meaning that other parts of the knee were affected as well, but without giving further details. The timetable remains the standard six months.

Before going down in 2016, Milik had scored seven goal in nine matches as his quest to replace Gonzalo Higuain was going swimmingly. His absence prompted the manager to use Dries Mertens as a false-nine, after Manolo Gabbiadini failed to step up, and the results were extraordinary: the Belgian forward tallied 31 goals in the new role and finished second behind only Edin Dzeko in the Serie A top scorer chart. From the production standpoint, Napoli are equipped to replace Milik: at this point Mertes is a full-fledged center-forward and his combination of speed, technique and shooting skills makes him almost unguardable. He has already scored seven times in nine fixtures this season, abundantly outproducing the Polish player, who had played only 195 minutes so far, scoring twice.

However, that does not mean that they will not miss Milik at all: he brings to the table some characteristics that are unique in the roster, such as his physicality, his ability in the air and his nose for the goal in the box. His absence also takes away the possibility to deploy an uber-offensive 4-2-3-1 with Mertens as no.10 behind a striker: Marek Hamsik no longer has the burst to be threatening in the hole and a Callejon-Mertens tandem would feature two very similar players. This tactic contributed to the 2-3 goal against Spal.

Last season, they signed Leonardo Pavoletti in January as an insurance policy, but he ended up recording only 194 minutes and two starts behind Mertens. This summer, they held onto him and Duvan Zapata, who was returning from a productive stint at Udinese, until the Champions League playoff, but, since Milik looked good earlier on, they decided to cash in on both strikers, who were sold respectively to Cagliari and Sampdoria for a combined €27M, a sum that profusely justifies the moves. Unfortunately, that leaves them without a backup striker for the time being.

Mertens has been extremely durable, but he will too need a breather from time to time. The coach announced that José Maria Callejon will fill that role when need be: the Spaniard has rare tactical intelligence and did well in the few minutes he was used centrally on Saturday. This will of course open up some minutes on the right flank: Emanuele Giaccherini is the first in line after they elected to keep him this summer, but the newcomer Adam Ounas is much more exciting option. As always, youngsters are brought in slowly in Sarri’s system, so it will take a while before the former Bordeaux attacker is ready to start.

In a surprise deadline day move, Napoli did sign one more striker this summer: Roberto Inglese from Chievo, but they agreed to leave him in Verona for one more season. Over the last calendar year, he asserted himself as the Flying Donkey’s best centre-forward. The first move by Azzurri in January will be to try to anticipate his arrival. Riccardo Meggiorini is set to return from an ACL in mid-October and Mariusz Stepinski could have completed his adaptation process by then. Therefore Chievo Verona, also in the standings, could be in a comfortable enough position to let one of their cornerstones leave.